Archive for the tag “Makaveli” 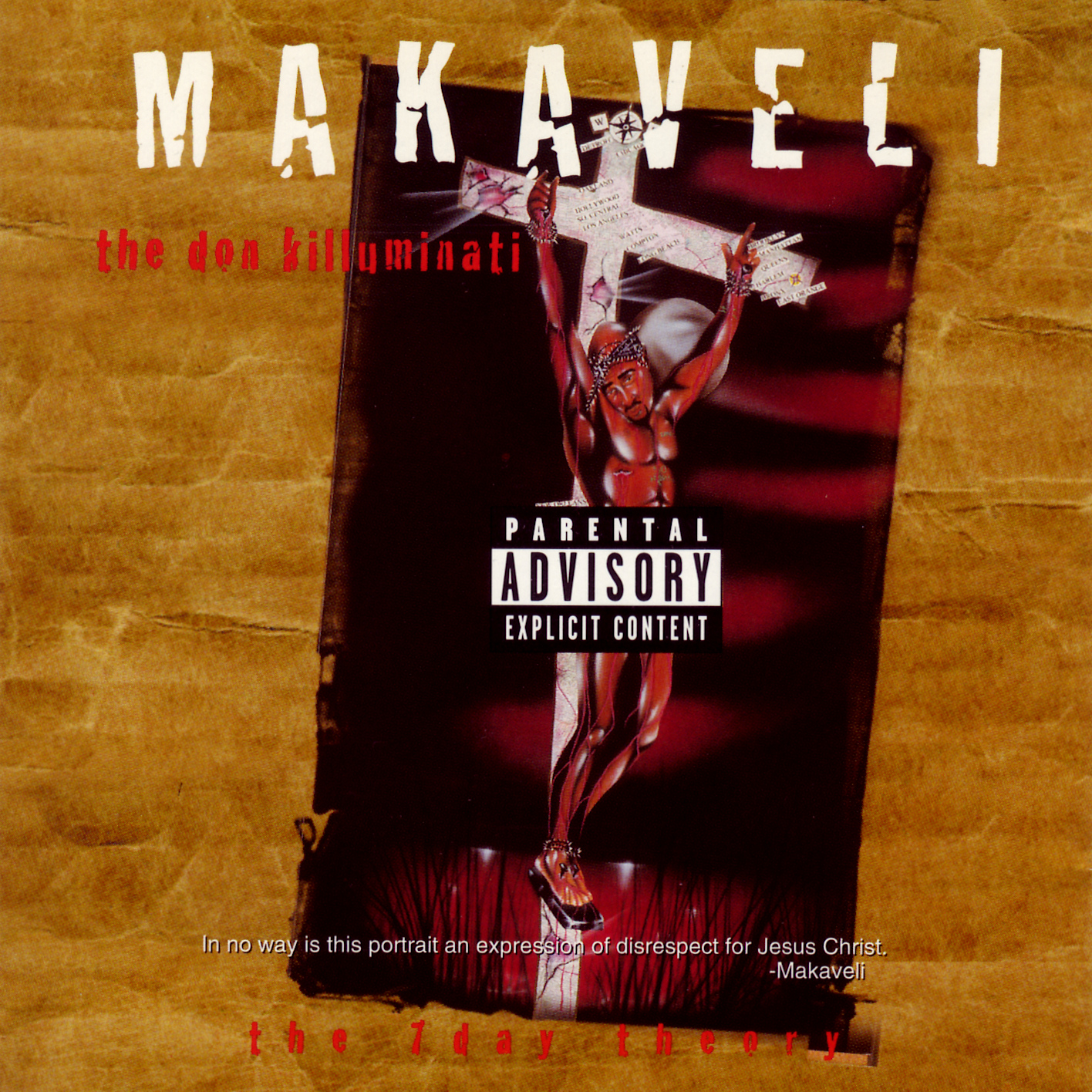 20. The Don killuminati: The Seven Day Theory – Makaveli (aka 2Pac)


As recent as September 13th I wrote on this site about how 2Pac had never created a ‘classic’ album, and that was after a jaunt through his old material. Whilst that statement still holds true in light of the bloated but at times brilliant All Eyez on Me many hold up as his ultimate classic, I must have been in a pretty bad mood when I reappraised one of the ultimate listens from my teenage years. That was his follow up under the Makaveli pseudonym, The Don killuminati – I got to grips with it again about a fortnight later and put simply it’s one of the most surprisingly well aged and era defining acts of bravery any rapper ever committed, and the ultimate gesture in me putting forward the case for Shakur as more than a posthumous bastardisation.

To really appreciate this album you need to view it in the context it was released in. The aforementioned All Eyez on Me was more of an event than an album, Shakur’s iconic pairing with Death Row that signified hip-hop as a huge, pop music revolution. It brought in the era of two disc opuses, which for all their problems (essentially loads of filler alongside the killer) was what every rapper or group, from Scarface, Wu, Bone Thugs and of course Tupac’s sparring partner Biggie, aspired to in the late nineties. It was the dominant sound of hip-hop’s new cultural centre, Los Angeles, reigning down on high. This album was a complete departure in so many ways, Pac ripping up that formula mere months later with an album recorded in a week (his vocals took an astonishing three days), light on guests and at just twelve records long. It was also the first to drop on Death Row without their production figurehead Dre; everything about it was Shakur flying in the wind.

The album is cohesive from start to finish, showcasing the much maligned emcee at his best, a contemplative, passionate and rounded rapper that was entering his prime. Never the greatest lyricist, what Shakur does is put heart and soul into every lyric, and his delivery on this album is world class. It’s also a hugely brave record as well, no Snoop, Dogg Pound or star studded guests (only Outlawz and Badass offer any bars other than Shakur, with a very brief cameo from lady of rage and Danny Boy’s wailing on Toss it Up the only Row presence), and it could of very easily included the vitriolic ‘Hit Em Up’ as well to bolster it, but that grinded against the album’s mission if certainly not its message.

That message is the full force of his personal paranoia and hate, and any hip-hop fan will know that makes for fantastic source material in a genre existing within a moral vacuum. Even on the supposedly accessible tracks the venom is marked. Toss it Up, this album’s equivalent to the nasty sex classic How do you Want it, drifts off into a diatribe of the hate figures Tupac was squaring up against, notably Dre, Bad Boy records and various other east coast figures. A sex jam featuring high profile R&B singers mutating into a diss record? If ever a single record could distil the essence of hip-hop’s most complex ever figure this came close. Not even the feel-good ‘To Live & Die in LA’ can finish without a Dre slur, showing that Tupac was a man completely consumed by hate.

The production is also different, less G-Funk and more driven by bass guitars and even Latin flourishes, a Californian album through and through but squarely different to the prism Dre and Death row had patented, already showing Shakur’s work rate in looking beyond his days as Suge’s west coast henchman. And if All Eyez on Me made every one desperate to make huge collections, this album was markedly more subtle in its influence. Jay-Z jumping on the metaphors of ‘Me and My Girlfriend’ is well known but equally the feel of this album is splashed all over Eminem’s debut ‘Slim Shady LP’ – even Lauryn Hill’s meshing of guitars, hip-hop and soul sounds similar to what Pac brought here. And the likes of DMX, 50 Cent, Ja Rule and even Lil Wayne owe much to 2Pac’s appeal and relentless work ethic, not least the entire cult of Shakur which was fostered for better or worse by the rumours about his death this album stoked.

It’s clear this was an artist trying to create a legacy, aiming to break new ground and fashion a brand new identity for himself and temporarily Death Row, in the process creating the label’s one and only classic that wasn’t powered by Dre. Of course the wheels would come off, the album was released posthumously and Death Row collapsed to never once again reach the heights. But here’s there’s a glimpse into what might have been, and the final, essential opus from an artist who, love him or hate him, no-one can deny shaped the face of hip-hop inalterably in life and death.

I’ve mentioned earlier going to University changed the way I listened to music, and it also introduced me to people I’d never heard of previously, even in the realm of hip-hop where I rather naively considered myself a bit of an oracle (I most certainly wasn’t). One album soundtracked those years like no other, and that was DJ Shadow’s awesome masterpiece.

Hip-hop without a rapper seemed a bit pointless, but DJ Shadow threw that idea to the cleaners. Shadow teased the emotion and soul out of samples slowly and subtly, creating gorgeously haunting tracks that showed that music could retain the drama and allure without 16 bars spat out ferociously. His expert creativity managed to paint vivid stories and pictures that emcees could never do over a career, gifting hip-hop one of its most melancholy moments and a pointed reminder that this was an artform that was created by a DJ, not a chatterbox microphone wielder.

It broke earth shattering ground, the first album to ever to be solely constituted of samples. Glance on the above Wikipedia page to really see the depth in Shadow’s listening material and his attempts to very mindfully push the genuine agenda of hip-hop back into the mainstream rather than the dominant commercial sound he felt it had become. If the Bomb Squad and Prince Paul were using old Funk and Soul breaks as a means of reaffirming black history to their listeners, Shadow’s sprinkling of a similar resource alongside Golden Age hip-hop beats and rhymes ensured he let rip his own identity.

I mentioned the influence of Paul’s Boutique earlier, well this was the next stage, the birth in album format of the DJ as artist. The central figure in hip-hop’s revolution was now finally considered a worthy enough protagonist in the ultimate form of artistic expression, and whilst nothing of this ilk has ever come close since you could argue this as one of the five most influential records the genre has ever seen. More pertinently, in my eyes at least, it’s one of the best as well.

Today marks what would of been the 41st birthday for Tupac Shakur. As an actor, rapper and, originally with Digital Underground, a dancer, 2Pac as he later became known, was one of, if not the loudest, voices in hip-hop in the early to mid nineties. Everything he did, from arguably one of the greatest hip-hop based performances on celluloid of all time in Juice, up until his untimely death in 1996, screamed for attention. For better or worse he was an icon of the times, constantly provoking discussion and debate, love and hatred. He live, and died, by what he stood for.

Now now. We know his music has been overdone since his death. We know he wasn’t one of the most quotable emcees of his time. But I’m gonna stick my neck out here and say 2Pac was mad underrated. He’s done a few albums that stand up well, Makaveli, Thug Life and especially Me Against the World. Even the magnum opus on Death Row, All Eyez on Me, counts as something of a classic if you shredded it down a little bit. But becuase teengae fanboys revered him after he died (I’m gonna admit I was one circa 1997-2000) hiphop heads never give him his dues. So I’m gonna plead the case for his legacy to be re-appraised slightly. Through the power of five songs…

Seriously, is it possible to dislike this record? Shakur is just straight up clownin with the Digital Underground and singing about shagging loads of birds. But it’s playful misoygny (by Hip-Hop standards at least) and just loads of fun. Love, love, love it.

Yowzers. This is probably the most distilled record of hate ever made. It even trumps Bob Dylan. It’s venomous bile of a different kind, and pretty uncomfortable listening at times. It’s not the most skilful or important diss record ever (KRS stand up), but it is one of the best. Sadly indicative of a man about to be engulfed by the themes he rapped about, it’s nevertheless a fascinating piece of music.

“Before the BDP conflict with MC Shan, Around the time when Shante dissed the Real Roxxane”. So begins Nas on the final verse of his iller than ill ‘Represent’ track, painting a picture that is pure homage to the old school pioneers. One year later though and Pac went one further and delivered this classic tribute to the forefathers of hip-hop. Shakur knew his onions, and this is reverential to a point that his west coast partner Snoop never quite managed with Lodi Dodi and Vapors.

Pete Rock & Cl Smooth’s ‘TROY’ is the quintessential ‘dead homie’ record in hip-hop, but this languid effort from 2Pac’s Thug Life group is a worthy addition to the canon. Such was Shakur’s conviction to his cause that his body was the ultimate outlet for his branding of his ideas, quite literally, with his tattoos. Body art in music was certainly no new thing, but Shakur gave hip-hop it’s first real beyond the wax militant, worthy in dedication if not necessarily in cause to his Black Panther ancestry. Also if not in name but definitely in spirit, ‘Pain’ by 2Pac and Big Stretch, is probably the other timeless Thug Life record, lifted off the Above the Rim Soundtrack.

Still an absolute anthem! This is all about Dre in the last stand of g-funk, the final apocalyptic record he gave Suge and Death Row, but Shakur came out banging heads with a brutal call to arms verse that would characterise his violent, combustible and musically hit and miss stay on Death Row. This song and this video, which featured cameos from Chris Tucker and George Clinton with a brilliant nod to both The Warriors and Mad Max, should of started what was Death Row’s second golden age. Things sadly didn’t work out that way, but this is the sound of hip-hop taking over the world. That it didn’t quite happen for another four years is irrelevant, because this was the sonic boom bap that announced the music was going to top the charts across the planet.

That opening slavo, ‘Out on bail fresh out of jail, california dreamin’ is still up there in hip-=hop entrances. And one of the first records I truly, truly loved in the genre; if it had been a Soundgarden or Smashing Pumpkins song that had made the hairs on the back of my neck stand up as a thirteen year old I might not be writing this blog today. And he did get that bomb beat from Dre and serenade the streets of LA.