“I can honestly say I don’t have much of an idea; I don’t play with any of the EDM guys at all. I tour the house and techno clubs in North America and there are some really amazing places to play. In L.A I like to play warehouse parties downtown, they’re done really well and have a really European feel to it. People like DJ Harvey & Doc Martin have been putting on parties here for years and I’ve gotta say they’re some of the best parties in the world. It’s just about great vibes.”

hit the quote for the interview.

So Rick Ross got shot up yesterday, crashing his car in the process. He’s since released a freestyle which basically amounts to a few bars at the start of Kendrick Lamar’s immense ‘Bitch don’t kill my vibe’ in which he states the following:

“Sometimes I look in the mirror, I can’t believe I’m alive/ Disrespectful to ni**as who want to take me alive/ Wishin’ death on you ni**as, we’ll never see eye to eye/ Somehow I pray for you ni**as at the very same time,”

Which is pretty standard big baller rap lyrics but slightly more meaningful (maybe) in light of this drama. Queue a million internet rumours…

New Daft Punk album due in May

Apparently it’s official; the Gallic troubadours are releasing a new album in May. Whether it will be any good is a moot point, but it certainly won’t do anything to dim rumours of the duo headlining Glastonbury, the first human landing on Mars or finding the cure for AIDS via synth exploitation.

It’s also worth noting that even though it’s not as good as ‘Homework’, either musically or in terms of the amazing videos like the one Michel Gondry did above for ‘Around the World’, sophomore effort ‘Discovery’ really was a gem as well and an opus that made my Friday evening just gone a lot of fun. Stream it below on Spotify.

BJ Smith – Dedication to the Greats

BJ Smith’s ‘Dedication to the greats’ EP is now out on NuNorthern Soul records, two great covers of the hip-hop classics with the Pharcyde’s Jay Dilla produced ‘Runnin’ getting the treatment alongside Mos Def’s ‘Umi Says’. Gilles Petersen has already come out and stated it’s the sound of sunsets across the world for years to come… which is pretty good praise!

The Mos Def cover has two videos, an illustrated romp here and the below done by Liverpool crew BeatBox, but my personal fav is the ‘Runnin’ track. Both are great however and now available to purchase from Beatport or iTunes. 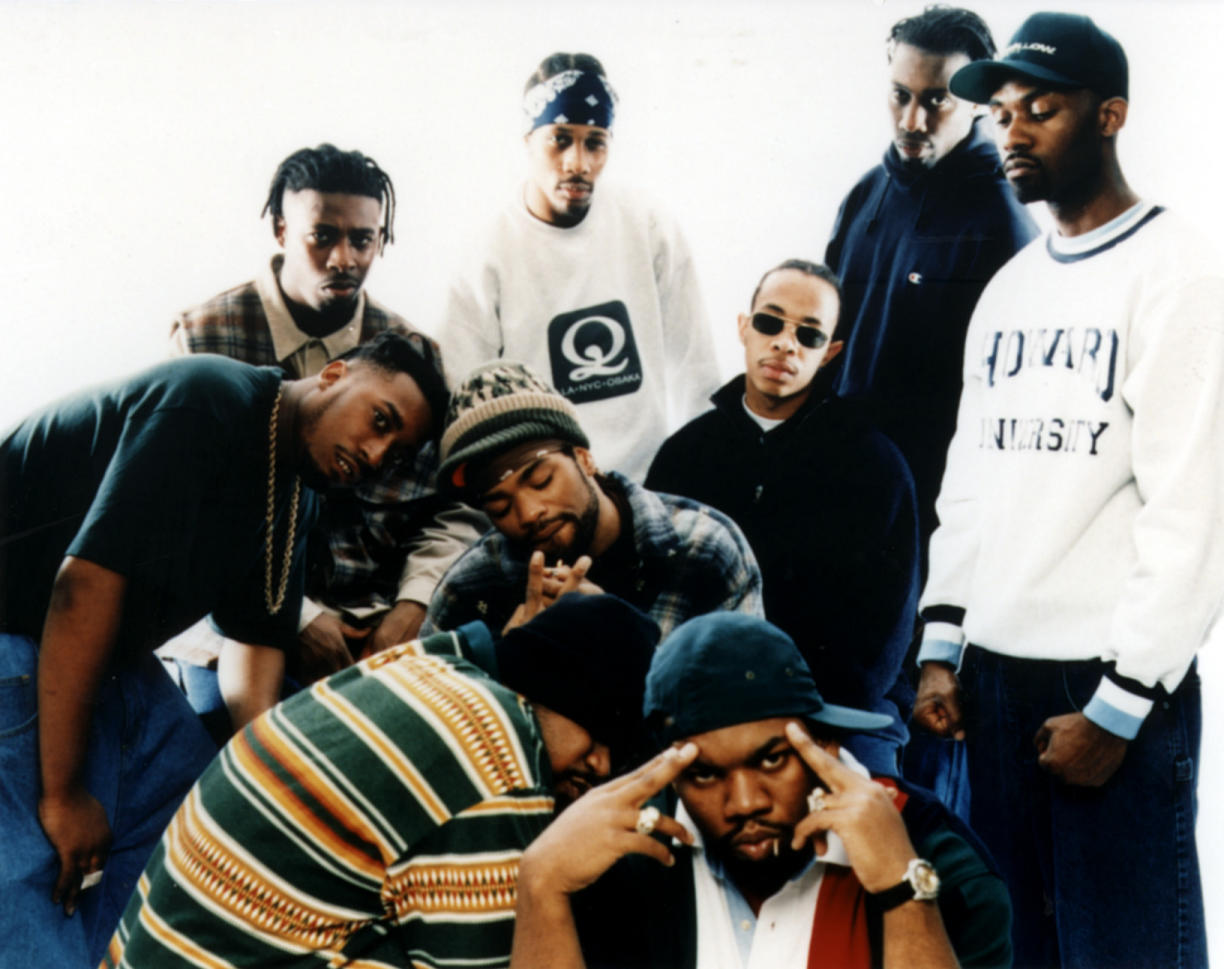 60 Minutes of Wu, mixed by Rinse FM’s Alexander Nut. The mix is designed to showcase the influence the monolithic hip-hop crew had on his musical upbringing in the mighty Wolverhampton, and is being delivered over on fashion emporium Oki-Ni’s great mixtape series. Amidst the consistent lyrical darts there’s the odd song the crew have sampled, such as Wendy Rene’s ‘After the laughter comes tears’, and lashings upon lashing of that off kilter bass heavy Wu production that makes you want to pull your hood over your head and delve into darkness. Great reminder about why Staten Island’s finest remain so relevant. Decent, very well produced and most important simplistically done edit from autocycle of Ben E King’s groover. This is getting RINSED this weekend in Salt Dog Slims.

Giano ‘This is House’ EP – review on Pulse

“Shock G’s dulcet tones insist that even though ‘we’re usually on a serious tip, tonight we’re gonna flip and trip’, the result is a beat so infectious you have to be either dead or deaf to not dance. Even being both of them probably won’t stop you.”

Derrick Carter approved jack on Classic that you know the boys at Uber will LOVE. Hit the quote for the full review, stream previews below and definitely buy it when it comes out on the 11th February.

Circus resident Lewis Boardman gets the full night focus in the first Circus of 2013 in its native Liverpool, playing five hours in the Hold of the Shipping Forecast tomorrow evening. The below promo mix gives an indication of what to expect. Full details here.

We dig Adriatique, the duo who first came to our attention back in July with a beast of an Off Sonar mix and then pricked our ears once more with a decent edit of yacht rock anthem ‘Wicked Games’. They’ve just done a video for LA based record label Culprit for their new tune ‘face to face’ which is not quite as good as the Daft Punk corker of the same name but nevertheless a decent record. Dig it below

The above fad is going around 50 major cities across the Globe…!!

All done by Hipsters™, on something called – ‘No Pants Day’ with the aim of travelling on Rail Transport wearing NO Trousers or Skirts for one day every January bringing a touch of what’s apparently classified by those involved as something called… ‘Fun Chaos‘ (The largest amount of Postgraduates in the entire history of The Developed World produces such ‘genius’ terminology even Thomas Hardy couldn’t comprehend let alone create..!!).

Yet, what’s rather interesting is the fact that those seats participants are sitting on especially those wearing Thongs ‘might be possibly occupied by other guests’:

An interesting thing is currently occurring in the Great Britannia with admissions from Police, NHS, Celebrities, Politicians & most interesting the Main-Stream Media that THEY all suspected something wasn’t quite right about Sir Jimmy Savile. Yet it’s only NOW they are revealing the full information AFTER his Death?

Certain individuals along with the Public/Charitable sector are attempting & failing on a major basis in giving the appearance of standing up NOW for the protection of the nations MOST vulnerable people, instead of during the decades of Savile’s debauchery, each day transforming him into some sort of Marquis de Sade…

Now, I don’t know if the above is true but I wouldn’t be surprised, as to do what Sir Jimmy Savile did required a unique mind of true villainy.

For those reading this who are unaware of this current Scandal, possibly due to NOT being British, or on the true influence that Savile had within British Society, then the below Photo has it all. He spent every Christmas Day with Margaret ‘The Iron Lady’ Thatcher when she was Prime Minster, that’s 10 Christmas Days.

I wonder what subjects THEY would talk about…

So, to the final section that’s simply about knowing if something isn’t morally right then don’t participate in it. We’ve got to stop with this theme of…

It’s weird but everybody does it so it can’t be that bad?

That….[put name of ANY celebrity/high-profile] does behave strange but they’re popular so they can’t be sinister as they wouldn’t be that successful?

Democracy in its purest form is about freedom of expression, with responsibility along with consideration for others… we all influence each other.

Ain’t cool NOW is it Hipsters™, when YOU think about it & that’s my point.

For more on what Sir Jimmy Savile possibly was you need to check these two essential sources:

Did The Smiths give a coded hint about Sir Jimmy Savile in 1986 in a Song?

Thread on the David Icke Forum on Sir Jimmy Savile that’s had OVER 4.2 million views…!!

For those Hipsters™ that I am sure will be reacting in their typical passive-aggressive ‘we aren’t hurting, anybody’ approach, I end this article with the below that perfectly sums you up. I’m expecting NO Comments from anybody that participated on those activities recently on the London Underground.