Archive for the tag “Pop Music”

Darren on Beyonce – It’s ALL a Blag

There’s been a bit of hoo-hah about Beyonce singing at the Obama inauguration, particularly with her admitting now that she mimed. Darren sent me the below before the Knowles revelations and as always he had a twist on the relavence of it all… 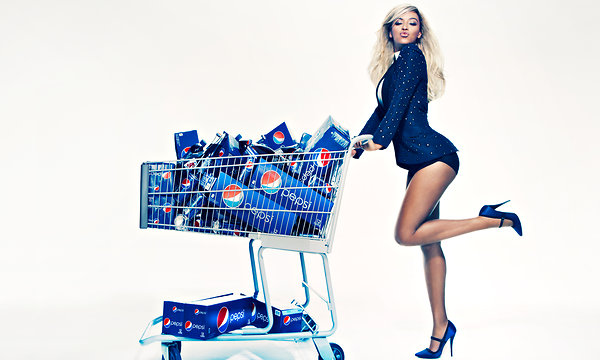 People often wonder what will become the next threat to the survival of Humanity. Here are a few of the main possibilities…

—
Whilst these views should be taken seriously, I think it’s much more simpler and easier to understand when assessing this simple definition:

Hypocrisy.
n.
1. the condition of a individual pretending to be something they are not, especially in the area of morals; a false presentation of belief or feeling. — hypocrite, n. — hypocritic, hypocritical, adj.

This reached ‘Mt. Everest’ levels at the second presidential inauguration of Barack Obama in Washington D.C (USA) on Monday 21st January 2013. Specifically, the invitation of Beyoncé to sign the national anthem as the climax of this historic event.

Now, Beyoncé has signed a $50million (£30million) deal to promote Pepsi but Michelle Obama, from the very offset of her role as ‘The First Lady’, has been busy promoting Healthy Living. Erm… let’s compare & contrast shall we…

It get’s better as everybody watching, either those estimated 800,000 in Washington or Billions watching across the world, witnessed Beyoncé deliver big-time with a traditional yet unique interpretation of the “Star-Spangled Banner.”

Now wait for the comment from the presenter at the end of the below performance, as it nicely goes into the final section.

But, it seems the truth at times can expose the trickery played on the masses, the best explanation coming from the over-lords of American Hollywood Gossip: TMZ.

I like the reaction of Harvey Levin (wearing the Green Polo Shirt), who is completely stunned at the slyness and front to do such a thing at such an occasion. This being the same man that founded TMZ who knows full well the levels of deception that celebrities are willing to use in self-promotion. Watching it, it felt like Levin viewed it as a step-too far.

If, such an audacious blag (Liverpool [UK] slang term meaning ‘clever con’) can be played, then what else has OR will be pulled on millions or even billions of ordinary people..!!

As for Beyoncé Knowles, her blag has not only failed but backfired on her spectacularly, as she is going to be delivering the Half-Time Show at the NFL Superbowl in New Orleans on Sunday 3rd February 2013. You see, Pepsi have been, even for their standards, going into hyperbolic-overdrive around this fact since November 2012.

The game itself sees for the 1st time; rival coaches being Brothers:

So, due to her endorsement deal alongside the clash of the Harbaugh Brothers, this Superbowl will be the most watched in history, as even those not into sports are likely to tune in.

As Half-Time Performer, Beyoncé under contract with the NFL, will have to do at least one Press Conference in front of the world’s media. I guess some questions around her ability to perform on the big-stage are going to be asked directly to her, which will in turn lead to some awkward karma moments.

So, reader what would you rather have celebrity or integrity? This is the question that will not only decide the outcome of the Twenty first Century but possibly Humanity itself.

Darren’s latest lament is up…

Last summer, I watched perhaps one the best films I’ve seen a long while in ‘Looper’, it reminding me of Michael Mann’s 1995 Masterpiece ‘Heat’.

Even, after six months the themes of ‘Looper’ still come to my attention just like that of ‘Heat’ did some seventeen years earlier, in that BOTH Motion Pictures attempt to explain the motivations of why people decide to become Professional Criminals.
Not for the needs of attention & power over others, just that the rewards are normally worth the risks. This being a theme that isn’t shown in Hollywood Cinema as it’s still the ‘Goodie vs. Baddie’ format with the Baddie losing at the end.

Yet, as we know life isn’t like this but it’s possible the reason that this simplistic format still exists is simply because it delivers fantasy; and isn’t this a major reason why people attend the Cinema? Another connection and the reason you are reading this article is a main theme within ‘Looper’. Set in 2044 (32 years in the future), it goes out to showcase that creativity has stalled across the Globe, therefore creating a major obsession in 20th Century Music & Fashion (1945 – 1999) within the Youth of that period.

It seems everything that could be created in terms of art at this point has young people looking towards the past instead of the future. It’s hinted in ‘Looper’ that Technology was the central factor in the end of creativity/imagination. Being creative & having some originality, I decided to look for a villain that is making the lowering of standards acceptable yet also making vast amounts of money doing so. Their are many contenders but really ONLY one whopper worthy of such an accolade…

Can anybody, even Lady Gaga fans or ‘Monsters’ as she calls them (Humans have intellect), inform me why she is worthy of such coveted attention? The Music seems secondary, with more focus placed on whatever item of clothing she is wearing. I’ve expressed more concerns on her Ladyship in a previous article, that’s an original read: All aboard the #BornBraveBus ?

Will the prophecy of ‘Looper’ occur? It’s possible when the UK’s & possibly the World’s Leading Music but Over-Hyped Festival – Glastonbury™ allows the following example of utter s**t to perform. Warning: If you find this performance impressive, congratulations you’re a proper Double Whopper with the Cheese…!!.

For all the corporate endorsement deals of the current Global Pop Music ‘Elite’, they don’t surprise or say anything interesting. It’s all about living in the V.I.P & maintaining that status, so the code of Wall St. has been transferred into Music. I’ll leave you with the below live performance all the way from 1976, whilst 37 years old contains more energy than Lady Gaga, a Woman who’s entire act is basically impersonating a Gay Male Drag Artist which is about replicating a Woman. If you re-read along with ponder on this point, you’ll realize it’s correct.